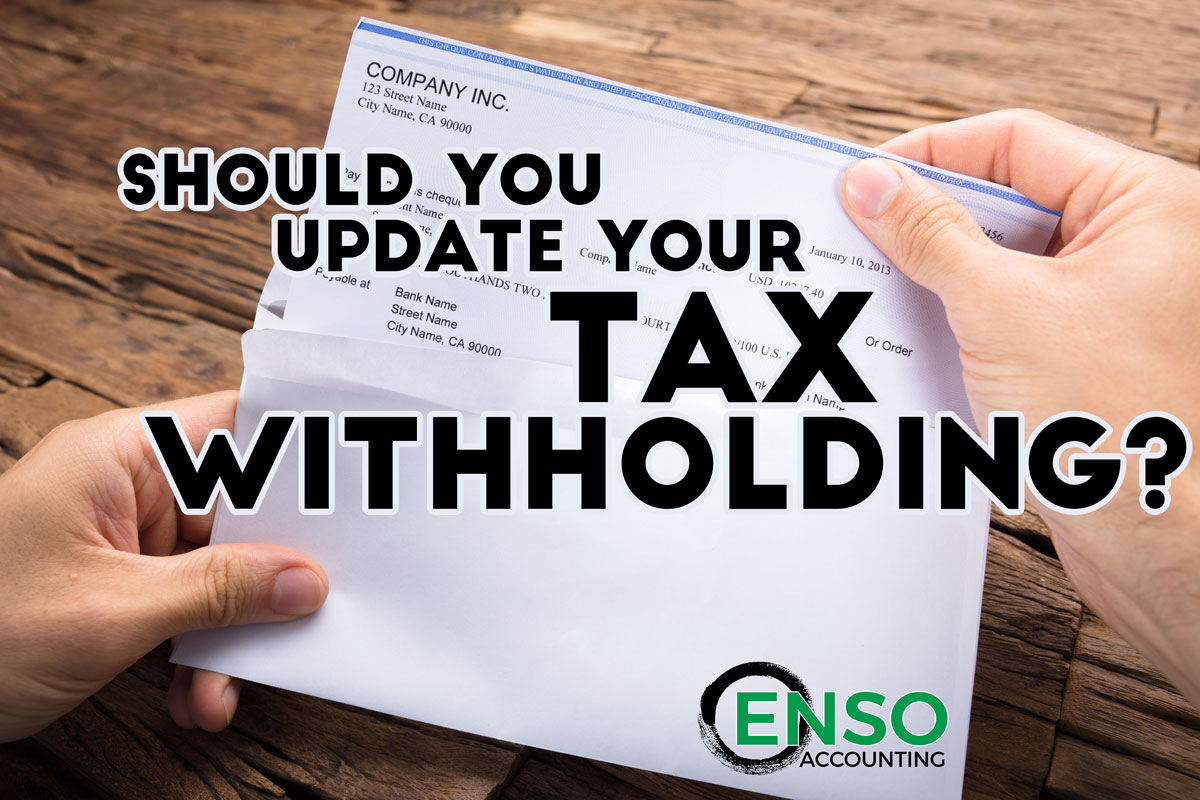 If your 2018 taxes brought unwelcome surprises, then now’s the time to look at your tax withholding for 2019.  Since we’re almost halfway through the year, you’re rapidly running out of time to make changes.  At least those that will actually make a difference next April.  Plus, the IRS is getting ready to release a new form later this month that should make calculating the right withholding even easier. Especially with the help of experienced advisors, like those at ENSO Accounting.

Remind Me Again…What are Withholdings?

This is the amount you have set aside from each paycheck to pay your taxes.  It usually coordinates with the amount of deductions you intend to claim for the year, but you can always opt to have more (or less) withheld. Ideally, if you’ve calculated correctly, you shouldn’t owe any additional taxes on the state or federal levels when you go to file.  Nor should you have a huge refund.  Although the idea of receiving a large lump sum next April may sound appealing, it’s not quite the windfall it would seem.  Remember, this is your money—it’s a chunk of your paycheck that you’re simply deferring. So, rather than viewing it as an unexpected pay day, think about what you could’ve done had you been earning a little more each pay cycle.

Maybe you could’ve paid off debts sooner.  Or avoided some debts altogether.  Either way, it’s better than you know exactly what you’re getting to better predict your cash flow.  Plus, then you’re not giving the government what basically amounts to an interest-free loan.  Each year, it requires a balancing act to have your tax withholding cover what you owe, without going overboard.  This year, it got even more complicated with the introduction of the Tax Cuts and Jobs Act (TCJA).  Fortunately, we may have a way to simplify things for the future.

Did You Notice a Difference?

Last year, many people saw a noticeable decrease in their tax refunds.  Across the board, it was only about a 1% difference, but some groups definitely felt the changes of the TCJA more.  Were you one of them?  Since this sweeping reform drastically increased the standard deduction, it also removed the option for several personal exemptions and drastically reduced the number of taxpayers who chose to itemize.  That being said, if you previously took advantage of itemization, then you likely got an unpleasant surprise when it came time to file your taxes.  Individuals with multiple jobs who didn’t adjusts their tax withholding may have also gotten a shock this past April.  Not to mention, families with dependents and even retirees were disproportionately affected by the Tax Cuts and Jobs Act.

Whether you’re in one of these categories or not, it still pays to reevaluate your withholdings.  Plan to do so at least once a year—especially in 2019, if you haven’t already done so—to ensure your money is working for you. Not the other way around!

Honestly, they’re supposed to make things easier!  Or, at least, more accurate when it comes to predicting the right tax withholding.  If you’ve recently filled out a W-4 form, prepare for significant changes the next time you see one.  The new tax forms are modeled after the 1040 summary, so your input will be much more involved.  In fact, they’re recommending that you have a copy of last year’s taxes on hand to complete this form as accurately as possible.  You’ll be asked not just to know your deductions, but also your potential tax credits, additional sources of income, and more details about the earnings of others in your household.

If this sounds like a lot, that’s probably because it is.  But, when we put all of these pieces together, you should have a more accurate picture of what your withholdings should be.  As well as what your normal cash flow looks like with each pay check.  Let’s face it, no one likes to get to the end of the year and learn that they owe a substantial amount in additional taxes.  But it also doesn’t make financial sense to defer your income, then receive a massive refund. Hopefully, these new forms will help us achieve that ideal balance falling somewhere in between.

Still, you don’t have to wait…

Until the new W-4 becomes available to adjust your tax withholding. If you’re not sure what your deductions or withholdings look like currently, it’s not too late to reevaluate these figures.  At this point, you could save yourself from the unexpected next April.  For assistance navigating these and other tax forms, contact ENSO Accounting!  We’ll help you make sense out of these calculations and create a plan for your financial future.  What’re you waiting for?